Imagine the following given in a deep Northern accent. 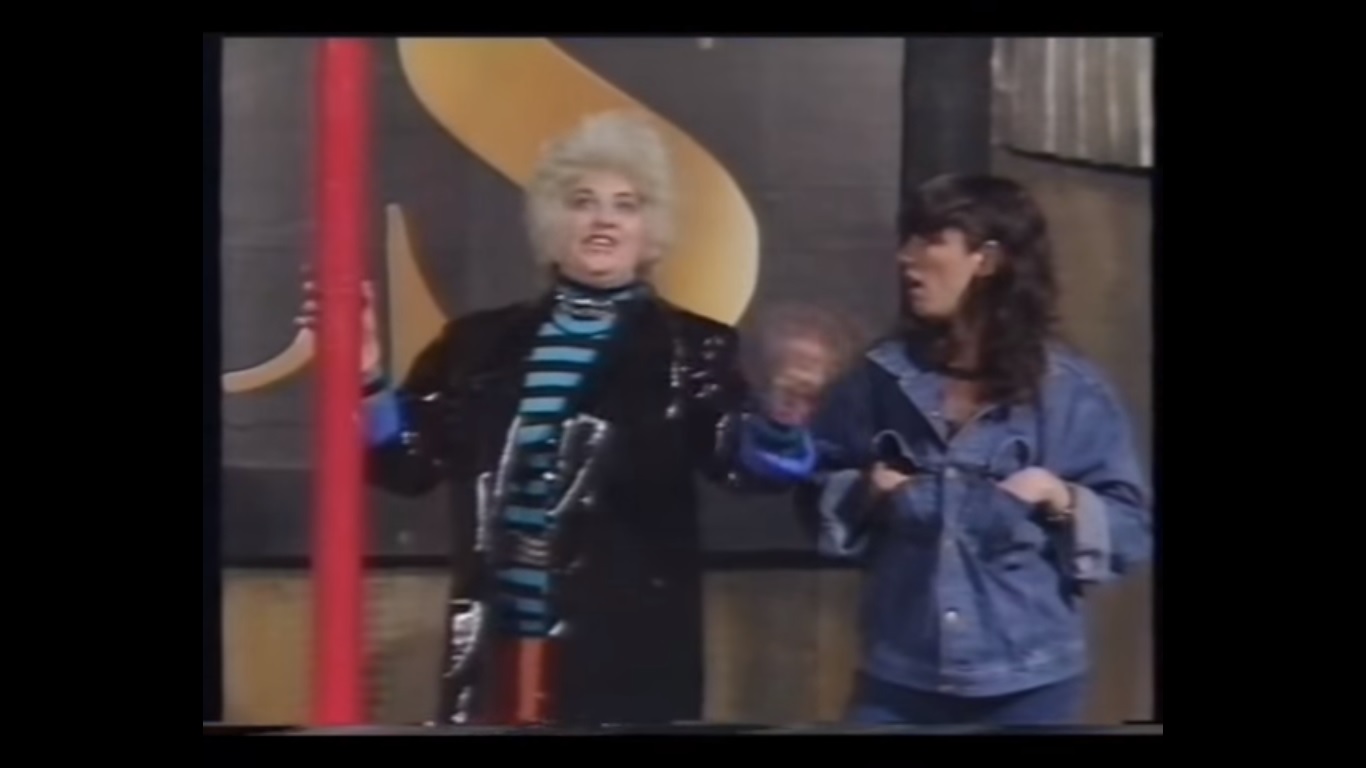 So me, Kimberly, Sharon and that cow, Tracey, showed up outside Mrs. Wilson’s house, as arranged, only Tracey showed up late because the bus took so long comin’ from Weight Watchers. She goes in each week and they tell her she’s fat and she goes out again, she says it’s really affective. Sharon felt a bit sick because she’d had a penis colada earlier while we were waiting for the tupperwear lady to show up. Most people hate tupperwear sales night  but this was totally bono fido, totally honest like. But she didn’t show, so we all show up at Mrs Wilson’s house to do the yoga night. You know her house, she’s got the pink guttering that me mam says was a bit open minded but it takes all sorts she says. Me mam not Mrs Wilson, she’s been all tense and upset since she’s had that breast enhancements surgery in Scunthorpe a year ago. The magazines say you have to make the most of what you’ve got but me mam says Mrs Wilson made a mountain out of a molehill, if ya know I mean. Now she finds it so hard to see she can hardly drive.

Anyway we go in, and the heating is on because you’re supposed to be sweating out your chakra, and our Kimberly said out of the corner of her mouth that she could feel the biggest pool of chakra in her neither regions, but then she took the coat off and she said she felt better. Mrs Wilson was there, looking like the Double-D underwire  bra was about to burst in her new Manduka loop back cami, bought to match her capri Amara. She said that she hadn’t slept at all and Tracey started laughing saying ‘Neither would I with me pillows on me face.’ Only Mrs Wilson didn’t think she was funny. Turned out she’d lost her two albino guinea pigs under the settee earlier and couldn’t get them out. The smell of pot purri drafting around the place was more powerful than Bernard Matthew’s breath after a Saturday night.

So, anyways, we get started, all stretched out on her deep shag in the sitting room, and  Mrs Wilson was all, ‘Deep breath girls!’, but you could see she was really really hot, and before we could even get down on the ground and give our sun salutation she got really pale and fainted. Me, Kimberly, Sharon and Tracey manage to get her up the stairs, waving the pot pourri under Mrs Wilson nose as she was going up, and we managed to get her towards the Marks and Spencer cotton sateen duvet cover, until Tracey came up with the idea of loosening the Double D underwire push-up bra. Before our eyes, two albino guinea pigs crept out and made their escape out the windows. Down the pink guttering faster than you could say ‘Yellow Beret’. We had to let ourselves out, and Mrs Wilson never even refunded the fiver.

Well. How are ya. Yeah, I haven’t posted in a while, mainly due to the little man no longer keeping a firm sleep schedule during the weekends. And so the blogs go by the wayside while I sort that out.

Anyways. The opus is done, all one hundred thousand words plus of it. And now that I have these ladies over the finish line, I’m convinced that I have written the WORST NOVEL OF ALL TIME WHAT WAS I thinking and so on. You know what you do with those thoughts? They’re an optical illusion, exactly like those thoughts that tell you it is golden. The truth is much more quantum than that, it both is and is not crap at the same time.

So it’s done. And I am in the strange position of not liking myself at all right now, convinced as I am of my failures and my laziness. Every flaw in my day to day life seems to agree with this message, that I’m lazy, sloppy, ignorant of the impression I make and crass about my speech and my gestures. It’s not helped by a sense of elitism I encounter in my day to day life, in work, in the pool… There are people out there who are a lot better at certain things than me. But where are they better people than me? Oh, wait, I can hear a voice in my head disagreeing with me. It says that in fact, they are better people than me. And then it points to the well thumbed list of my failures in life as evidence. And then I remember that John Banville worked that metaphor with more skill, and I give it up as a bad idea.

I want to write the start again. And edit the whole thing to kingdom come. And then hide. And then stand forth and let them shine.