Yeah. So it is Sunday night, and I am ill. Have been ill for most of the week, with the most delightful ailment you can imagine. I have been experiencing a huge toothache in one of my teeth. This, is not good.

Now, for those of you not new to my company, you will be aware that I hate dentists. The last time I went to a dentist, no-one had heard of Monica Lewinsky. Yes, I’m serious. I went to get my wisdom teeth out at eighteen years of age, and, it turns out, proved the stereotype about red-heads. No, not that one. The other one. Seems I bled excessively on the table and they had to close up in a rush. I woke up from general anaesthetic with a bruised and punched face, and had blood everywhere; in my throat, nose, ears, hair… I was supposed to go back to fix a bracket to a poorly drawn down incisor. Funnily enough, I could not be persuaded back into the dentist’s chair again. Yes, this is my life now.

But back I went. The pain in my tooth became the pain in my face became the pain in my ear, as the other half simply insisted I go to the dentist. So, WITH NO NERVES AT ALL, I got myself an appointment. They were great, even helpfully had the sounds of a drill going as I went to the reception, that was nice of them to do that.  I ended up talking to someone very young about the teeth. She was utterly rushed, and was very much about trying to things over and done as possible. Like a kid sent to the teacher, I kept as much details of my long absence from them as possible. And how were the teeth?

They were grand. No, seriously, really. One of them might need a filling, but the rest were grand. Even the one that caused me to come there was fine; turns out I had sinusitis. This is a delightful bacterial infection centred in, you guessed it, the sinuses (don’t look it up). But it had managed to get back enough that I had a great stonking great temperature and goo and discharge and all of it, so lots of pills and rest were required.

Anyway, so here we are. Sunday. I’m still not great. Life has given me, without exaggeration, a pain in the face. The mood is stellar. What you looking at?

This Valentine’s day just gone, I was lucky enough to go and spend the evening at the Irish Writer’s Centre, where they were holding an evening of the Lifecycle of the Book. There, I was lucky enough to sit in with Faith O’Grady of the Lisa Richards Agency, Deirdre Nolan  of Gill & MacMillan (no relation, worse luck), and Declan Meade of Stinging Fly. The audience was populated with members of the industry, interested writers and interested readers, and the event was also hashtagged at #booklifecycle on Twitter. I would recommend having a look at the twitter feed, it gives an excellent summary of the information and the q&a afterwards.

The evening reinforced the conclusion I’d reached in my own research; that one piece of work will never be enough, and that readers can take a long time to arrive. A person needs to create a career in fiction, with books each year, possibly both fiction and non-fiction, and that it is a life of work, and of graft.

One question I only thought of after the fact was, if one receives a request for a full manuscript after a successful query, how long in fact should you take to get it to the agent/publisher of your dreams? It is, however, easily answered by common sense; if you’re hoping to enter into a professional relationship with a person, then you should answer the request as soon as possible; a week would probably be the longest I’d leave it. I’ll need to ensure that when I do send off my ladies, that they’re ready to go immediately.

It has been a life of near misses, if I’m truthful. The suggested promise of my youth has not materialised, and finding the perfect statue within that endures despite my defects has not happened. Lets see what happens.

So, I was thinking about writing a blog. But the fact is that I have nothing to report. I haven’t gotten the book deal, or lost the weight. I haven’t bought the big house, had the face lift, or managed to have the child confirmed as a genius. So what is there to report? No success is no news, right?

Don’t get me wrong. This blog is not intended to be one of those common Facebook posts of sunset on a beach, where a size zero stares into the distance and we remind ourselves it’s all about the “Inner Beauty”.

Yes. Yes it is. Also, Unicorns.

What it is about, is realising that my brain never shuts the hell up with the complaints. I never enjoy a meal without worrying about the next one. I never have a good weekend without planning the next one. I NEVER say well done, I always say Could be better. Because it could be. If you keep hitting your mark you’re setting your target too low. But losing all sense of joy about life is not good. I lost it recently, and it is nice to return more and more to myself and a sense of happiness about my life.

And happiness as I get older is more about recognising what makes me happy, without shame, and seeking that out. A clean house. A good meal. Sleep. Oh god do I miss sleep. Reading what I want to read, nah bother to anyone else.

So the instinct of not opening up the blog pages because of not having anything to say has a follow-up thought. Do it. It being free of success is nothing. It feels better to write, than to not write. Or, as a better person once said; 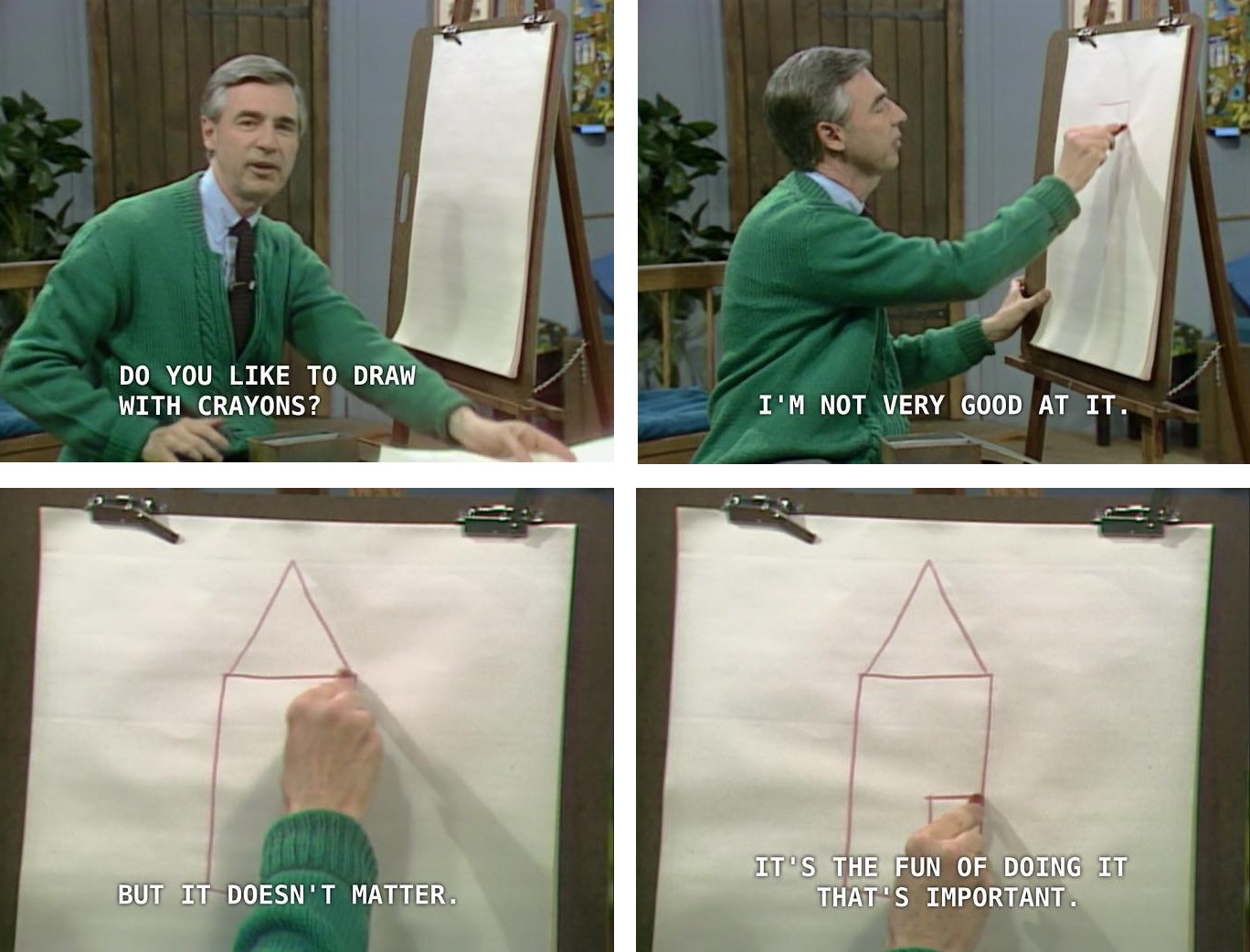 Evening all. Remember me? Back in the long long ago, I used to write on this blog quite regularly. These ticktap words, as powerful as a bird on a feeder, were once upon a time quite common. But life and life’s obstacles get in the way, and it is with an effort I open up the blog writing side of me again.

Resistance; there’s a lot of it about at the moment. We’re marching, and campaigning, and getting angry in the face of danger that is real. Good. Galvanised populations encourage me and give me hope, whereas cynical resignation most certainly does not. The future is uncertain, and amazingly enough it is not unintentional. The British move towards Brexit is going to be disastrous for several different reasons, but mostly because they don’t know how they are viewed by other countries. The UK is not important by itself, and that is going to be news to a lot of its population. And Trump is a collapse, not an advancement. He is not a strongman or a skilled businessman, he is a failure in 140 characters. However, the people around him are not failures, but are competently malevolent to any progressive agenda. Watching his moral compass become the new normal is awful. Social Media is the new depressant, or at least, it’s influence is more pronounced. I miss the days of kittens, and I don’t even like cats.

My wonderful ladies are written, and are being edited. I made a synopsis of each chapter that is one page long, noting how many pages were in each chapter. First job was to make each chapter the same length, as much as possible. Then look at each new chapter, and figure out what the purpose of it was. Then to clean up each sentence, word by word, to as minimal as possible, and if it can go out it should go out.  I’m up to page 24. One hundred pages plus to go.

This has been a difficult week. I’m older, had another birthday. Getting older is a privilege, I am not denying that. But oldness I now know leads towards that ultimate sadness, and so this birthday is just a day, now. Oh look, another year. Onwards. It is also the week that contains the anniversary of the loss of my mother, and the subsequent schism of my family, so the divisions get writ large this week. It is quite something to remember the day that led to the loss of one of the most fundamental people in your life, then get out of the car and try to start the day. I remember the grief being utterly stilling, there was no defence against it. Now, there is merely a terribleness to it, that does not drown me the way it used to. Oh, but how I miss her, though.

And now, to bed. I wish you all peaceful slumbers and a kindess of dreams. Night night.