I went out this weekend! Yes! I did! I really did, I left the house and everything. I went to see a play in the Peacock Theatre. The Peacock aims to show modern plays, and it is affiliated with the Abbey, Ireland’s national theatre. I went to see Richard II, which was produced by the Ouroboros Theatre Company. 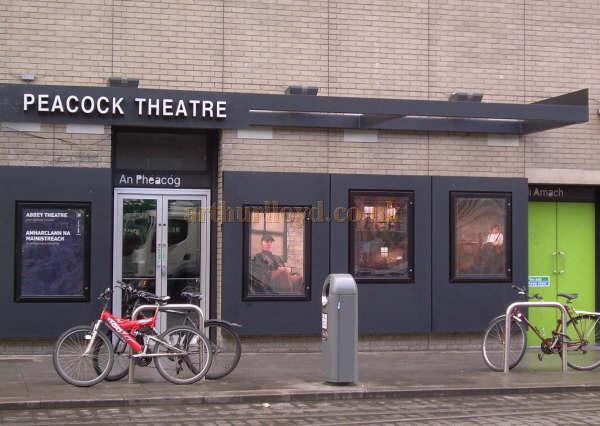 Exterior of the theatre, in one of the roughest neighbourhoods in Dublin…

It’s been so long since I was in the city centre, I will be honest with you, I found it loud and rushed. And I, who used to love my walks through the city streets more than anything! But all I could think of was how much I enjoyed life now I didn’t have to deal with all this insanity. This was especially true the closer I got to the theatre, as Abbey Street is a very rough area.

The play itself five acts, all verse, and centred solely on the political story of how Richard II lost his throne through his own errors of character. The King has had his head turned by flatters, who convince him of his power and his might. He himself is also convinced that the status he holds is his by Divine Right. Hence, his being right, in charge, top of the heap is the right and honourable position for him to hold and anything less is a perversion (a failure to understand noblesse oblige, if you will). That’s his weakness. His failure, however, is that he does not prevent or settle an argument between two noblemen. Diverted himself to Ireland, he is unprepared when one of them returns from exile and invades and gathers supporters. Eventually, the King is deposed, made human and humble, and faces his death with more courage than he faced life.

Richard becomes more human the further away he is removed from the throne. We see him initially surrounded by flatters, who seem sexually suggestive and sensual as they weave about him. It is to be presumed that they are lovers, at least, that is one of the charges that is made against them when they are arrested. The Queen is ignored and neglected. (I’m not suggesting that homosexuality is a defect of character, but I’m guessing that in Shakespeare’s time it wasn’t looked on too highly). As his power goes from him, we see his assurance fade, his panic grow. His outbursts become more manic and terrified. Eventually, when all is removed from him, we see him become a resigned person. Despair leaves him, and he is almost cheerful to have nothing on his shoulders.  He even becomes reconciled to his Queen, the two giving each other a tearful goodbye. In prison, about to be murdered, he speaks with honesty from the heart (and, in this production, he speaks it while on the loo). A man who failed at being great, made good by being just a man.

And I loved it. I’ve been away from anything like a live performance for years, but it was a majestic experience to be be in an audience again. I do hope very much to go again!