So, after my little trip away last week, I was able to rediscover the delight that is going on social media. As I clicked on and scrolled through Facebook and Twitter, I could feel as a physical thing my mood lower and drag. Really, being a party to the overblown GOOD NEWS of friends of friends, and the over-emphasised BAD NEWS of news corporations is to be dragged in two extreme directions.

So I stopped. As we were at the start of a new month, with lots to recommend the decision, I decided to stay off social media and to be sensible and wise. If I found myself with free time on my hands, then I would read a book or get away from my desk.

Since then I’ve read three books.

Yes, really, three. One was Elizabeth Smart’s By Grand Central Station I Sat Down and Wept. One was a who-dun-it set in Regency England. One was by Carl Jung. None of them were very big, but that wasn’t the point. I’ve re-discovered the need to read, and to avoid the constantly shifting dopamine-hit of online life. 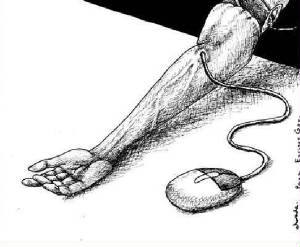 And have I been missed? Not a bit of it, which would suggest that the ‘social contact’ is nothing of the sort. Instead, this last week has made it clear how users are in fact the cow eating the grass, the product itself, rather than the buyer.  I’m the captured audience for adverts, political views, manufactured debates and inaccurate reporting. Now, however,  I listen to the news on the radio and hunt out news websites if something comes up. I already subscribe with the other half to various newspapers of different perspectives, so bias is overcome as much as possible.

The trick, however, is to be up to date, to have a full knowledge of current events, but to avoid the massive tidal wave of subjective information wherever possible.

Right. Get off the internet, the lot of ye.