Monday – Important meeting with boss to sort out the rest of the year. We’ve had a superb head of school for the last three years, and I would love to chain the woman to the post for the rest of her life. But she’s more than eager to go and do research, and so it really is time to start the process for searching for a new head of school. I’ve spoken to most of the staff members personally or in a meeting, and we’ve agreed an external search is what is needed. So I and an academic colleague go to meet with our boss’s boss to get the process started. I’m surprised by how nervous I am. But it’s all very straightforward, and in that way that can happen we all agree with each other and it’s all over before you know it.  I can only hope the rest of the week goes well…

Tuesday – We have a conferring! Our MSc and MLIS programmes take place in the O’Reilly hall, and I’m amazed at my attitude to them. Previously, I regarded them as the highlight of my year. I’d met these kids at orientation, and then would be lucky enough to see them, robed and ready, able to accept their parchment. But this year, with so much on my mind, it was just a task I needed to get through. That’s not right, I need to ensure that doesn’t happen again this year.

Wednesday – Staff meeting! Let’s all have a meeting! And there is a lot to discuss at this one. For one thing, there is a rather large change in our undergraduate programmes, not least the addition of a fourth year; we’ll need to add new modules, and new teachers. There’s a lot to discuss.  I wanted to go to the gym at lunchtime, but nothing doing.  I go home and prepare, prepare, and prepare some more.

Thursday – Right. Off we go. What’s happening today is I am giving a small talk on the Job Grading Scheme for admin staff in UCD you can see a lot of it under #Inclusiveucd. The important thing to note is the promotional prospects for any admin here, which are listed below:

If you are an academic or a technical member of staff, it is possible to apply for promotions. If you are an administrative member of staff, you do not have access to any promotions, or job regrading, or pay rise. And in case it wasn’t clear, inflation means that prices have gone up and up. So administrators in UCD are placed in the grossly unfair position of having their skills devalued and their pay reduced over and over again.

Unsurprisingly, most of them are women. 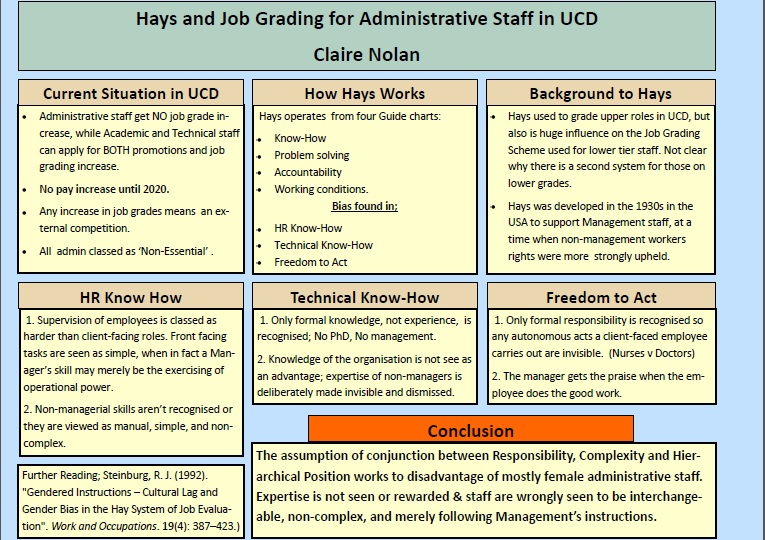 My poster from the event. Read it, please, it’s important.

So when the Equality, Diversity and Inclusion Report was being launched, I put my name forward to speak on the issue. I produced my poster on the gender bias that is recognised to exist and went along with my notes.

I sat down, job done. The woman after me spoke kind words about my speech, saying how could she follow that?! And the administrative staff who attended were moved, and angered, and grateful that it was spoken about. I am not smart enough to speak about this, but I am the only to do so, and so I’m stuck with me.

Was I nervous? Yes. But I was also angry, and that was hopefully apparent. This is wrong. Fix it. Or I will.

The rest of the evening was spent trying to find my son and mother-in-law, who were trying to find me on campus. I had a mind full of terrible imaginings but after nearly two hours found them.  Then home. Then bed.

Friday – the rest of the session. A lot of people had kind words, but I would love to see it become something more concrete than that. And soon, there is a lot of salary I should be earning right now, thank you very much. But I was just glad to have a day that didn’t see me fret or bother. And then I answered emails, drank coffee, and went home on one of the coldest days of the year, facing into the coldest weekend.

And guess what? The boiler’s borked. Night night all.