A Place of No Distance

Four hundred steps mark the difference between Elaine O’Hara’s home and mine. Four hundred steps, and I know it is, because I counted it this last Sunday. I was coming home from the shop with the little man while I counted, much to his annoyance, because I always get distracted and sad when I think of Elaine and her fate. There is nothing comforting, or happy, about what happened to her, and I’ve learned that any reflection I spend on her has to be done when alone. I cannot recall her without sadness crossing over me, and the mood unsettles my son.

Elaine, as you can gather, lived in the same estate from me, in a flat somewhere near the shop where I visit almost daily. She disappeared from the estate one day in August 2012, at a time when I was on maternity leave. The little man was not a great sleeper, and he still isn’t, and a lot of that time I can’t be certain of with any real perception.

And that is important, because I saw Elaine, I feel, the day before she disappeared. I would have kept track on my phone of feedings, and changes, and as much as possible kept to a schedule. And my schedule on that Wednesday was a bit delayed because little man and I went down to the shop, which was the day I saw her. The week later, when signs went up that she was missing, I felt I must have been mistaken. They said she went missing on Thursday, and I didn’t know she lived in the estate, I thought I had seen her as a once off visitor. It wasn’t until recently I realised that she lived near me, that I could have seen her just coming home. I am saved by that realisation, a little; the idea of seeing her the day she passed away is too close to the knife she was on. 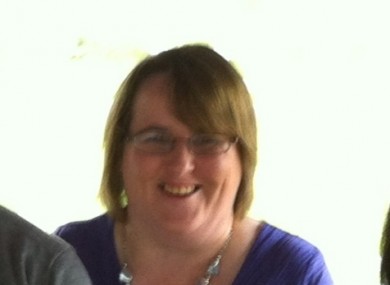 She was noticeable. She had the figure that I recognised is due to medication, usually anti-depressants; large, uncomfortable. There were several photos put out by her family to the press, but the one they released first is the person I recognised, with glasses and a round face. The later photos, released to show her dressed formally and with style, were not familiar. The estate I live in is fully of yummy mummies, all lyrca-clad women power walking with urgency; Elaine stood out for not fitting in. There is another sadness to that estate as well. Elaine said in her texts that she wanted to be a mum, and that estate is nothing but families. Across the road from the apartments is a playground, no less. Elaine would have been surrounded by children everywhere she looked.

Notes from the Pit

The texts in question are small notes from the pit that Graham Dwyer worked to sink Elaine into. His mastery over her was born from two things; her own need to secure a life that expressed her own pain but allowed her peace, and his designs to hurt a mentally ill woman who, he thought, would not be missed or cared about. Elaine was in the most real sense of the word a tool, or object, to him, one that he could perhaps enjoy without consequences.

His texts to her, and there are thousands, evince a mind so solely without compassion or awareness of her needs that it is sullying to engage in them for too long. Her own voice grows more desperate the more they interact, the closer to the date of her disappearance. She tells him she is scared, he will kill her, she wants a baby, don’t hurt her… he says, sure, why not, procure a victim for him and afterwards they’ll go back to her flat and he’ll knock her up. Kid won’t be his, though. Did she hear the sounds of the children in the playground when she read this? Did she think of her daily sights when she did?

I want to cry with helplessness, and hurt, when I think of Elaine, so I can only imagine the pain her family has been put through. Elaine was taken from them first when she died, and then secondly by the coverage of the press of the trial. Her requests and her searches, her boxes ticked on sites, has been the excuse needed to de-humanise her into a scandal. She’s been made into a freak, a damaged person of little value, and society has now a comfort in that surely it would never have happened to them. But that was what Dwyer wanted. He wanted someone that held for society little value, someone that would have no public advocate. And what of the people around him, his wife who is forced now to see the unmasked version of the man she called her companion, her consolation, her husband? How must life be for her, with knives dragged into her own heart?

A Most Evil Act

A while ago I heard a little boy speak about evil with admiration; being evil, in his mind, meant he would get all the pizza. If I had the conversation with him again, I would tell him there is a difference between being selfish and being evil. A selfish act is uncaring, but an evil act prevents all further good. Evil ended Elaine O’Hara. Whatever her limitations, no further good could come to her as her body in its tracksuit was left out and open to the elements. No development of self, no change of heart, no growth, no happiness would ever be hers. Her right to grow, to change, to understand, was taken from her, taken by someone who didn’t care or know the best of her, taken by someone who used her, hated her, and made her gone. Elaine O’Hara can never be anything other than the sadness Dwyer caused in her, and that is the most terrible thing. Her culmination is final and absolute, and it is not enough at all.

I think of her nearly every day. I think of what she wanted, of the four hundred steps between us, four hundred steps that are no steps at all. I think of the sights I see each day, that she saw each day too. Today, as I write, is the day of the trial’s summing up. Today is the beginning of the rest of life for her family without her. Hopefully the jury will find him guilty, will work to remove him and his influence from our society. Even in their work, though, they can only provide a slip of white paper to cover the inky blackness of his foulness. Even if they cover it, his own foulness will seep through and darken their efforts, make the white paper black, due to the terrible horrors that can hide deep, deep down, in the unspoken evilness in the human heart.