This delightful, oh-so-lyrical topic was suggested on Facebook by my husband, Mark Dennehy. Why? I’ll ask him and get back to you at the end of this post. However, let us make a start, shall we?

The first starting point in researching this is Wikipedia. Your intrepid blogger goes and enters this in the search box and gets the following definition;

A pseudo-Riemannian “metric” is a nondegenerate quadratic form on a real vector space Rn.

Okay… that didn’t really help very much. What about a Riemannian metric? Wikipedia gives me the following;

ARiemannian metric is a positive-definite quadratic form on a real vector space.

Huh. I’m still in the dark here. So what is in fact a quadratic form?

A Quadratic form is a homogeneous polynomial of degree two in a number of variables. For example,

is a quadratic form in the variables x and y.

Well, now at least we’re on more familiar ground. I recognise the style of equation given. Is it possible that we’re looking at a nomenclature for a form of mathematics that I’m already familiar with?

Lets have a look at the definition for a homogeneous polynomial. What does that tell us?

A polynomial is an expression of finite length constructed from variables (also called indeterminates) and constants, using only the operations of addition, subtraction, multiplication, and non-negative integer exponents.

Yeah but hang on, though. This seems almost understandable and familiar. 2 + 2 would be a polynomial, according to this definition. Right, so now we’re getting somewhere. Let’s go back, and have a look at the definition above this.

The same degree… without being cubed or squared? So our example of 2 + 2 would seem to still be valid. So what was the one above that?

A Quadratic form is a homogeneous polynomial of degree two in a number of variables. For example,

is a quadratic form in the variables x and y.

So a Quadratic form seems to relate to the equation where the variables are squared. Okay, I’m balancing my understanding on a shaky tray, but it’s still hanging in there.  So what’s the next one?

ARiemannian metric is a positive-definite quadratic form on a real vector space.

Crashing into a brick wall. I’m guessing that this is stating the equation they are speaking of is not a minus (i.e., -2y would not be included) and by the same logic would not be grafted on the -x\y section of the graft. Very much guess work here, though. However, there’s only one more definition to go. This is the Boss Level, the big cheese, the whole enchilada.

A pseudo-Riemannian “metric” is a nondegenerate quadratic form on a real vector space Rn.

Nope, I’m back to giving you blank stares. But with a burst of inspiration, I put ‘Pesudo-Riemannian’ into Google Images, and this is what you get; 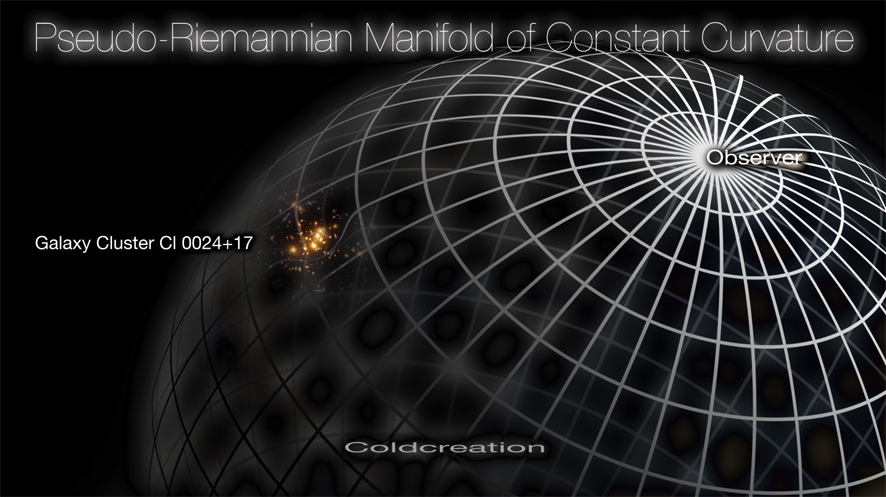 Which suggests that these equations are of use in describing huge, unknown tracts of space, that they help us to understand the unknown, that they can do a universe more than my stupid efforts can perceive. They see what we can’t.

Sometimes I hate being so obtuse.

Still no clear response from hubby regarding why he suggested this topic. If he gives me a reason I’ll update this entry.

4 thoughts on “Finding Out What a Pseudo-Riemannian Matric is.”